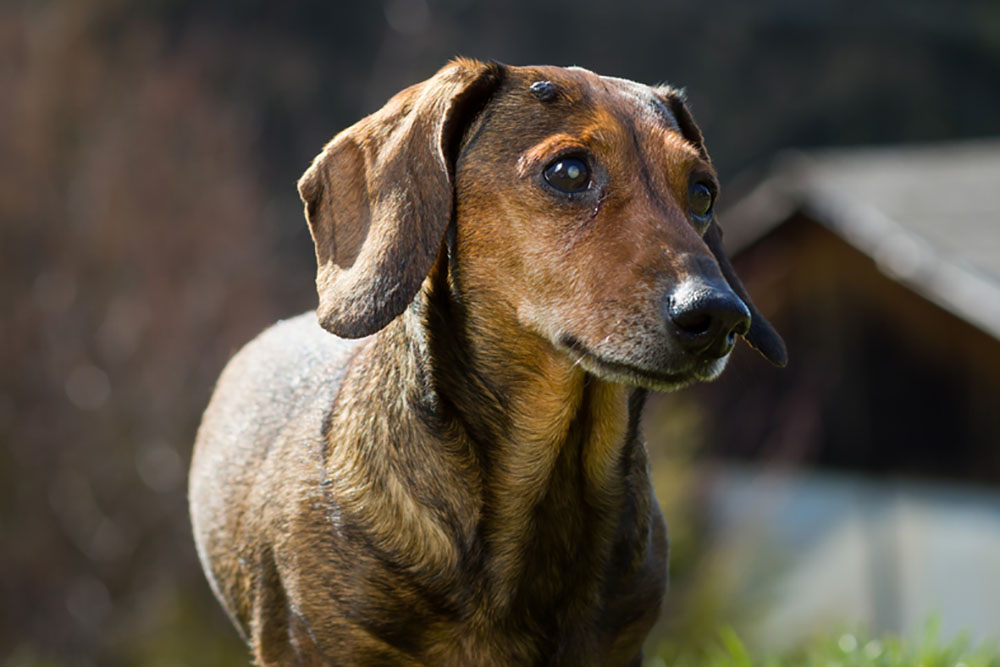 On dogs, the most common type of cancer are tumors of the skin and the tissues beneath the skin known as subcutis. These tumors account for between 40 and 60 percent of canine tumors. This article will strictly focus on benign skin tumors.

Basal cell tumors come from the basal cells that are found within the skin. These are most commonly found in older canines. These tumors often occur as solitary nodules that can be stalked or broad-based. More often than not, these tumors are located on the neck, shoulder, or head of the canine and are often pigmented. As a result, they are often be mistaken for melanoma. In order to receive an accurate diagnosis, tissues of the tumor must be biopsied and they must be examined under a microscope. The recommended treatment is known as wide surgical removal. In some cases, it may be needed for the dog to undergo chemotherapy and/or radiation. The breeds at greatest risk of basal cell tumors are Poodles and Cocker Spaniels.

This type of tumor is a benign growth that comes from cells found in blood vessels (also known as endothelial cells) within the skin or subcutaneous tissues. Skin hemangiomas are typically smaller than subcutaneous hemangiomas, and they also appear with a reddish-black tint and as a dome. These tumors can be caused by a number of things, including the sun, some chemicals, or have an unknown cause. They tend to affect middle-aged to older canines, and numerous breeds are affected. To diagnosis these tumors, a skin biopsy must be taken, followed by electromicroscopy and immunohistochemistry, which is the process of detecting specific antigens with a tissue sample. To treat cutaneous hemanigomas, there are a few different options available such as surgical removal, electrosurgery, and cryosurgery (which is freezing).

This is also a benign tumor of the skin, and it affects very young dogs—usually those of one to three years of age. They come from monocytes and macrophages, which are the white bloods cells in the canine’s skin. They are generally located on the head and neck, and they’re hairless, round, pink-red lesions that can often ulcerate. Due to their outward appearance, they can sometimes be known as “button tumors”. After onset, these tumors will generally regress within four to eight weeks. If they do not, however, surgical removal is typically necessary.

These tumors are sac-like, non-cancerous structures that have a lining of epithelial cells. There are numerous types of cysts depending on the kind of cells that are lining the structure. The location will help to identify the exact type of cyst as well. Generally, the treatment will be observation without therapy, though surgical removal is sometimes necessary.

Some common types of cysts are as follows:

These are benign tumors that come from the skin and subcutaneous connective tissue cells known as fibroblasts. They are typically located on older female Boston terriers, boxers, Golden retrievers, Doberman pinschers, and fox terriers. As a general rule, the tumors are solitary and are commonly found on the flanks, limbs, and groin. Fibromas can be stalked or dome-shaped, soft or firm, and can contain the skin pigment melanin. A microscope exam is necessary to make a proper diagnosis. Treatment requires close observation, surgical removal, or cryosurgery.

These tumors come from the skin cells that are found between the canine’s hair follicles. They are generally located on the neck, upper chest, lower abdomen, legs. They may secret a substance that is similar to toothpaste. To diagnosis the tumor accurately, a microscope examination is necessary. To treat the tumor, surgical removal will be necessary, though chemotherapy can be effective in some cases.

This tumor is a growth that consists of mature fat cells, or lipocytes. It is generally a soft, well-circumscribed, subcutaneous, fluctuant mass that is found over the sternum, chest, abdomen, and upper part of the limbs. Generally, these tumors are found in older females who have been spayed. They can occur as a single mass or as multiple masses. Some of them are infiltrative, which means that they have the ability to penetrate the deeper body tissues; however, most of the tumors are located just beneath the skin. To diagnosis these tumors, a sample of the tumor needs to be examined under the microscope, which determines whether mature lipocytes are present. Surgical removal is generally necessary to treat lipomas. However, depending on the size and location of the tumor, it may be recommended by the dog’s veterinarian to simply leave the lipoma alone. If it is recommended to go the surgical route, it is ideal to remove the lipoma while it is still small.

Mast cells are actually part of a canine’s immune system, and they are a crucial part of a canine’s inflammatory response to tissue trauma. When it comes to mast cell tumors (MCT), they can be located on various parts of the body, though they are typically located in the skin. The actual cause of mast cell tumors is unknown. There is a breed predisposition toward these tumors with Boston terriers, boxers, English bull terriers, and English bulldogs being at the most risk. The tumors are generally solitary masses that are located in the skin of the extremities, head and neck, and trunk. In as many as 80 percent of canines with MCT, there have been reported stomach and intestinal ulcers. Research has shown that this may be a result of the large amount of histamines that the MCT releases. It is important to understand that all canine mass cell tumors are not benign; in fact, up to half of them may become malignant. As a result, all mass cell tumors need to be biopsied and microscopically identified. Treatment will typically involve a wide surgical excision (which consists of removing the tumor surgically along with a wide area of skin around it), chemotherapy, and/or radiation.

Nevus (more commonly referred to as a mole) is a well-defined skin defect that can come from any skin component or combination of skin components. Nervus is often used with a qualified like sebaceous gland or epidermal. In order to properly diagnosis a nevus tumor, a biopsied tissue sample must be examined under the microscope. Treatment typically consists of observation without therapy or surgical removal.

There are a few different types of nevi, including the following:

Canine papillomas can be a result of a virus or they can just occur spontaneously. There are two different types of papillomas: oral and cutaneous.

The oral papilloma in dogs is highly contagious and is of viral origin that can be spread from one dog to another via direct or indirect contact. It generally affects canines younger than two years of age and is the most common type of papilloma tumor. Numerous lesions are generally seen in and around the canine’s mouth. The tumor will often undergo spontaneous regression within the a few months of onset and then the canine is immune to infection afterward. If regression doesn’t occur, chemotherapeutic agents are available to minimize and eliminate the tumors.

This is a specific type of tumor that comes from the perianal glands that are located around the anus. They can also be located around the skin of the canine’s tail, thigh, prepuce, and the top of the canine’s back. These tumors are commonly found in older intact male canines, and as a general, rule, they are benign. They are also referred to as hepatoid gland tumors, because as a cellular level, the tumors are similar to that of lever cells or hepatocytes. They can be either solitary or multiple, and they are dependent on whether testosterone is present. They generally regress when the dog is castrated. If castration doesn’t result in full regression, then surgical removal is the next step.

These tumors come from the cells of the sebaceous glands. This gland produces a waxy/oily substance that lubricates the hair and skin of canines. They are similar in appearance to warts or cauliflowers and common in canines, especially spaniels. They can appear anywhere on the canine’s body, and they are generally solitary, though they can appear in multiple lesions. The recommended treatment is surgery. It is rare for them to reoccur locally; however, as many as 10 percent of canines could develop a sebaceous gland tumor in a different location.

These tumors come from the cells that produce melanin known as melanocytes. The various pigments in a canine’s skin are a result of the melanin that is produced by these melanocytes. The tumors found in the skin are typically benign, but tumors in other areas of the body like the nail bed or oral cavity may be malignant and metastatic. Melanoma tumors are often found on the trunk and face. An examination under the microscope will reveal cells that consist of brown to block granules. The ideal treatment is surgical removal.

These tumors come from the macrophase/monocyte system and can be spread during mating or any other type of close contact. They are generally located on the external genitalia as well as the face. The masses are similar in appearance to cauliflower, and they are solitary or multiple, ulcerated, and friable. The identity of the tumor can be identified under the microscope, and the treatment consists of surgical removal, radiation and/or chemotherapy.

These tumors come from hair follicle sheath cells and are generally solitary lesions. They can be found on the head, tail, and limbs in canines of older than five years. They are cystic or solid, elevated, round, and well-defined. They can ulcerate and sometimes lose their hair. A biopsy is necessary as well as a microscopic exam. Veterinarians prefer to surgically remove the tumor.

As you can see, there are numerous tumors and growths that can appear in a canine’s skin. It is crucial that your veterinarian examine any type of new growth as soon as it is noticed on your canine. Some of the aforementioned lesions may look similar, which is why a biopsy and microscopic examination is necessary by a qualified and trained pathologist in veterinary medicine is necessary. To help ensure a positive outcome, early identification and treatment is a must.

For more information, don’t hesitate to reach out to us at Huntsville Veterinary Specialists & Emergency.